Trees, a metaphor for life itself, are the main theme of Alberi Maestri. This itinerant performance will guide you through the vegetable kingdom to enable you to experience its complexity and intelligence. Plants’ incredible ability to analyse and manage complex problems through coordinated action is brought to the fore, as is the vegetable world’s response to trauma and aggression. The spectators, guided by a performer, will experience an intense aural, visual and poetic experience which will lead them to an empathic and emotional awareness of the extraordinary community of trees and plants. These giants, the most ancient living beings, have observed all, from the passing of generations, ice ages and the precession of the equinoxes, to the smallest of insects crawling on their bark. This is a personal and, at the same time, collective journey to the space where the human and arboreal worlds meet. 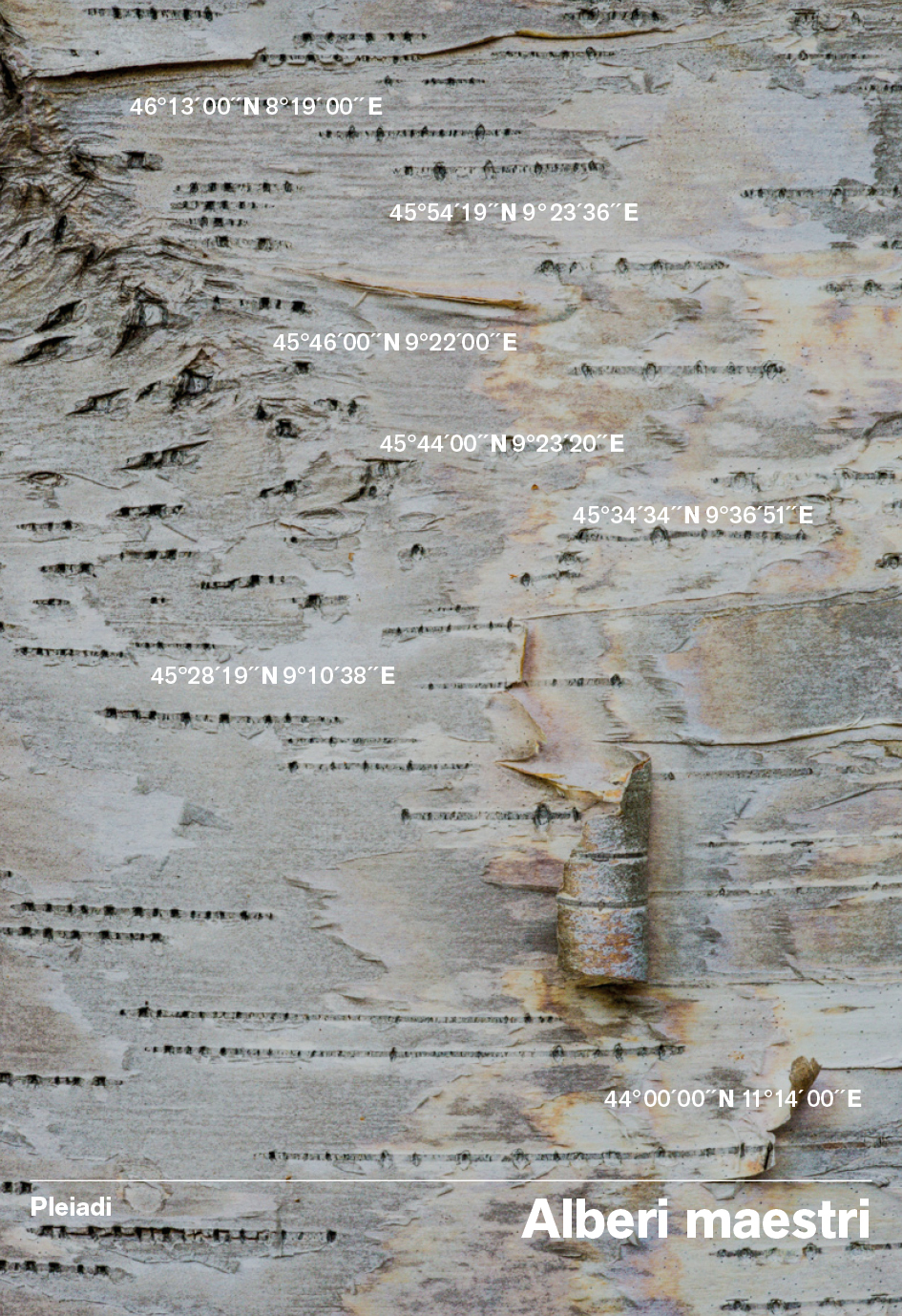 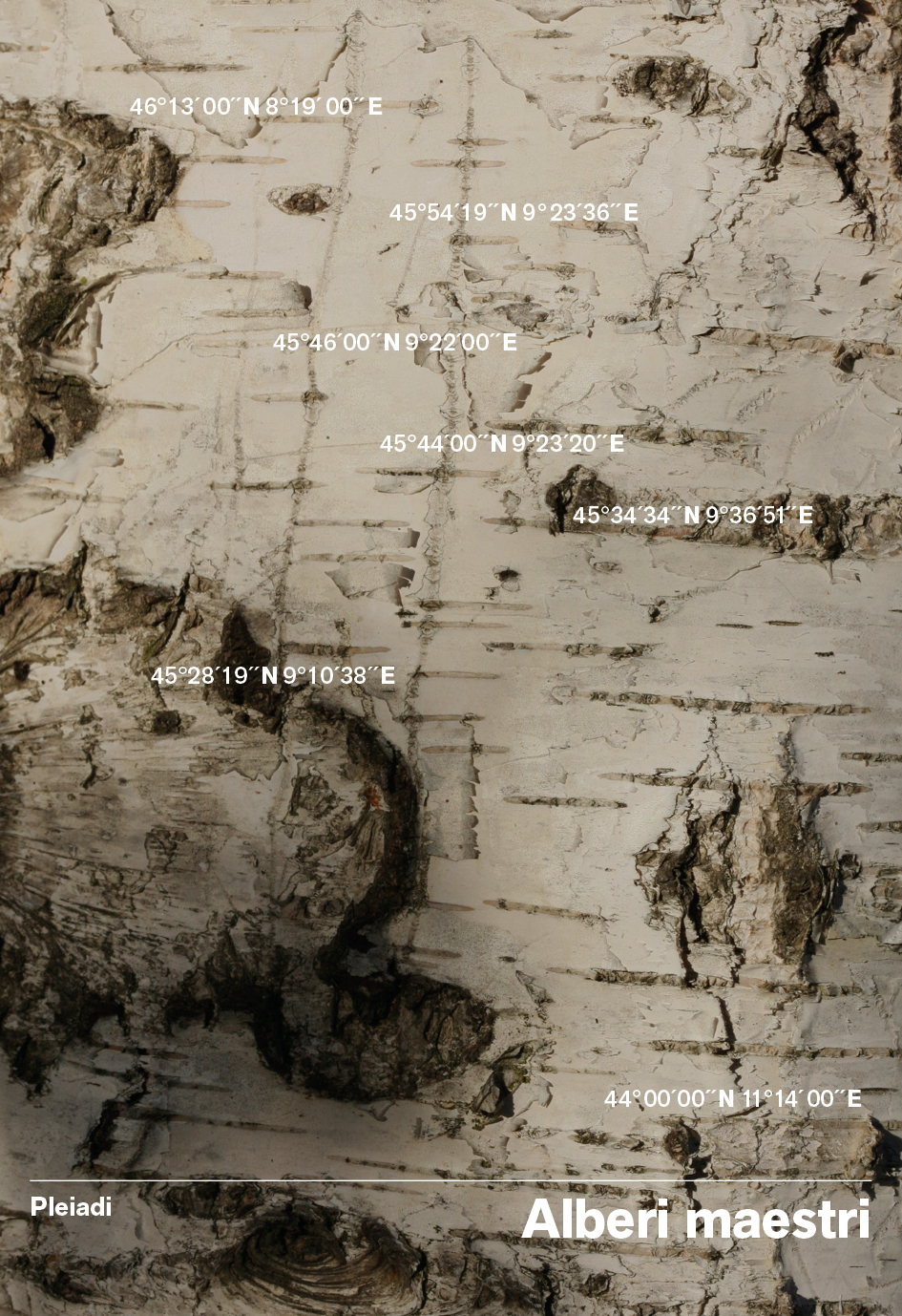 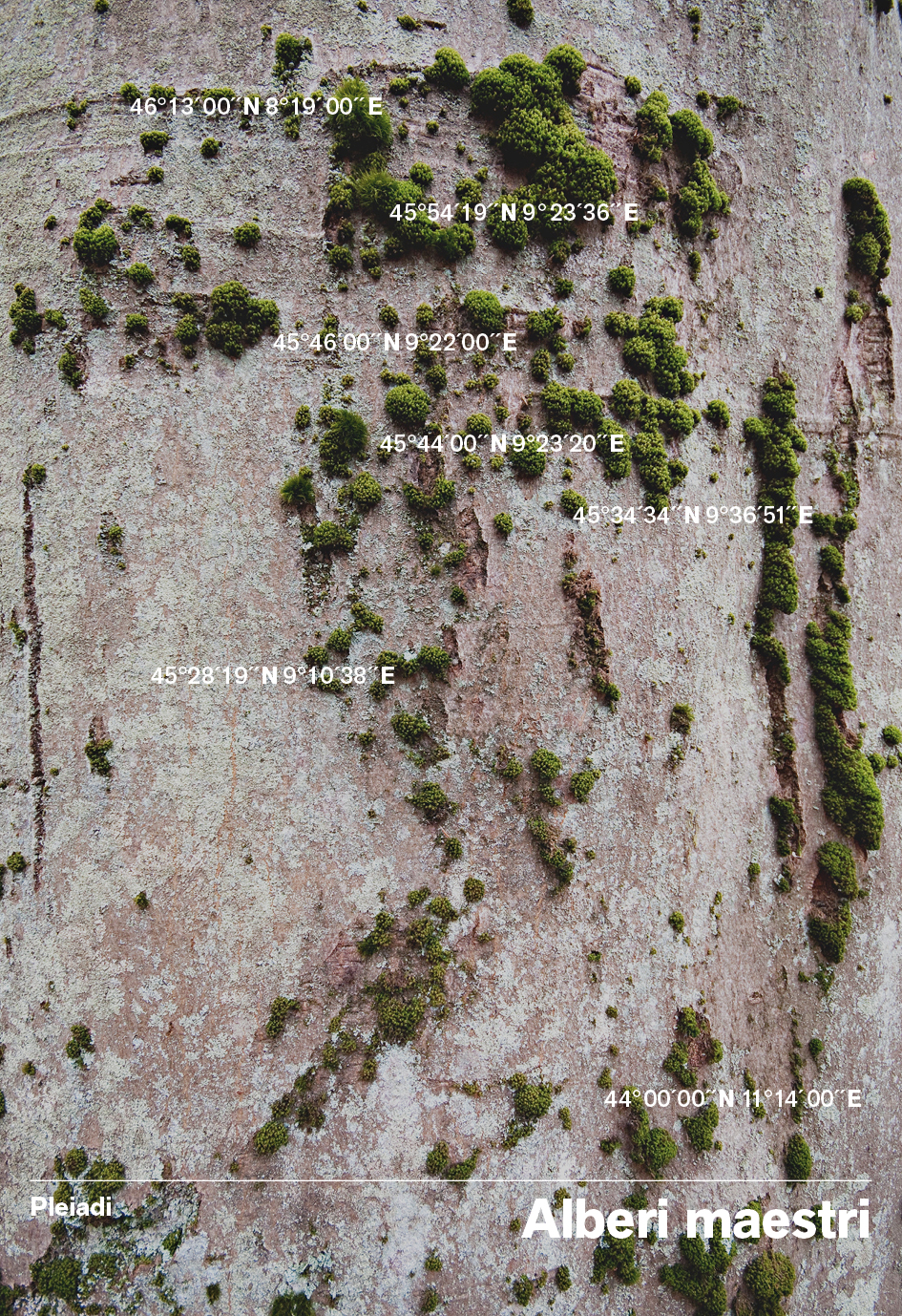 How much do we truly know about trees and the infinite complexity of the vegetable world? Not much, if we are being honest, and this leads us to ignore the fact that they are the most essential part of life on this planet. There are 3000 billion trees on the earth, without considering all the other forms of plant life. They are responsible for the process of photosynthesis, which produces all of the oxygen in the atmosphere and all of the chemical energy used by other living beings. Plants have many more senses that animals and they live in non-gerarchical but still extremely complex communities. These incredible living beings can communicate among themselves, undertake long migrations from one side of the Earth to the other, overcome deep trauma and even bring life to places where it had disappeared, making desolate landscapes fertile again.
Spoken word, sound, walking, crossing, installations and contact come together in a multi-sensory journey divided into 19 scenes placed along a path which winds through the landscape. The spectators will be guided from the urban landscape where they are used to living through areas where various levels of coexistence between humans and plants are possible, to real and ideal spaces where nature has reclaimed its rightful space. 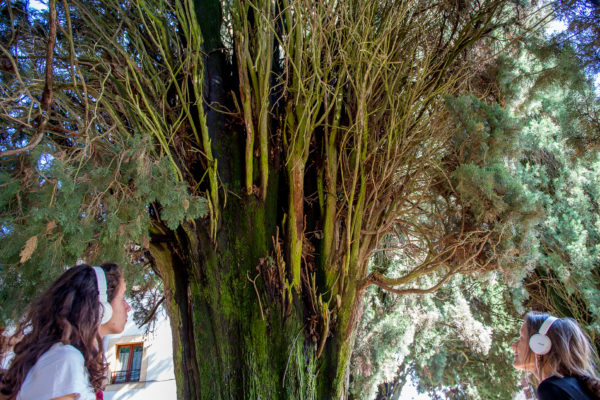 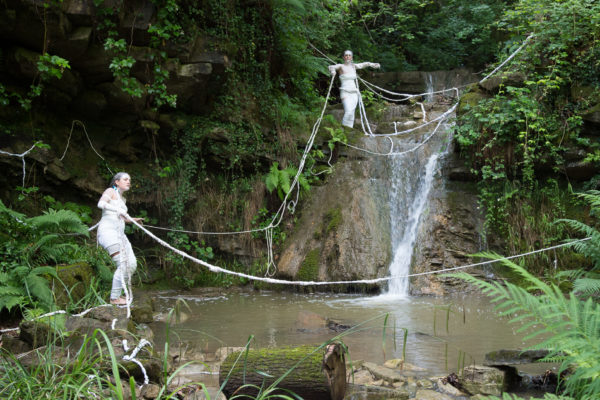 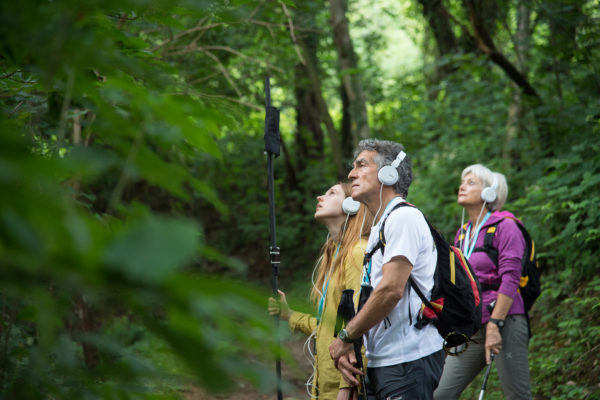 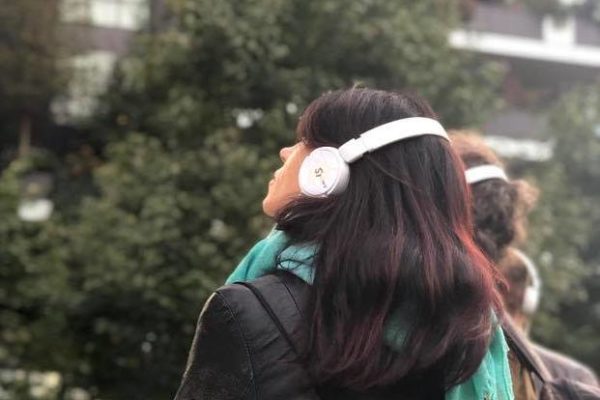 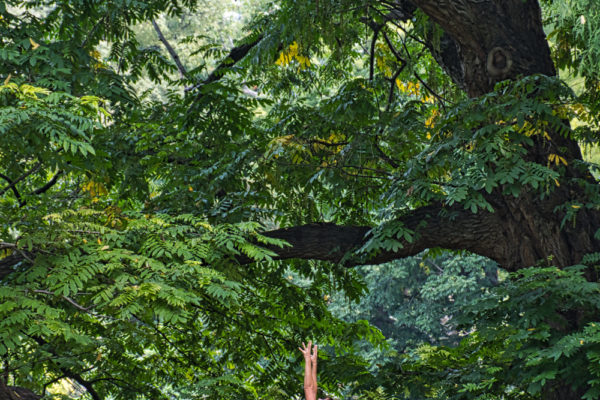 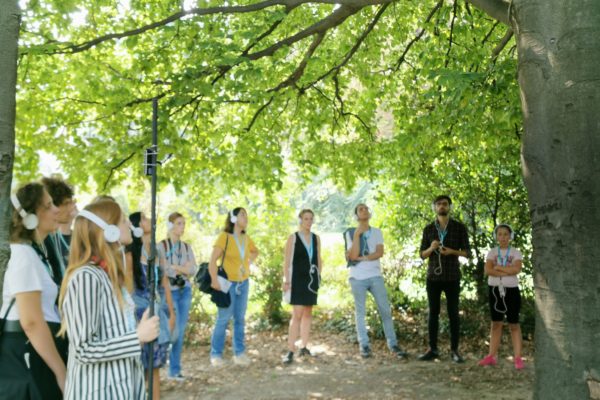 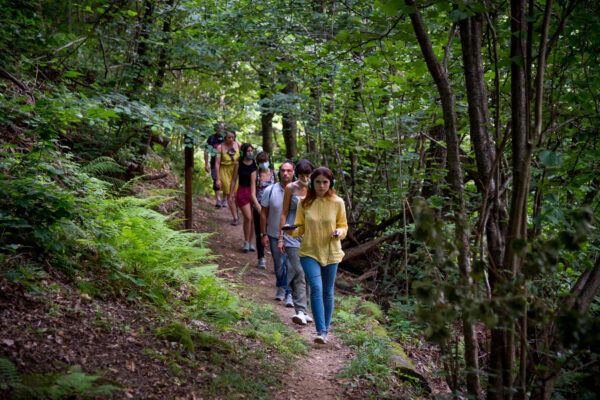 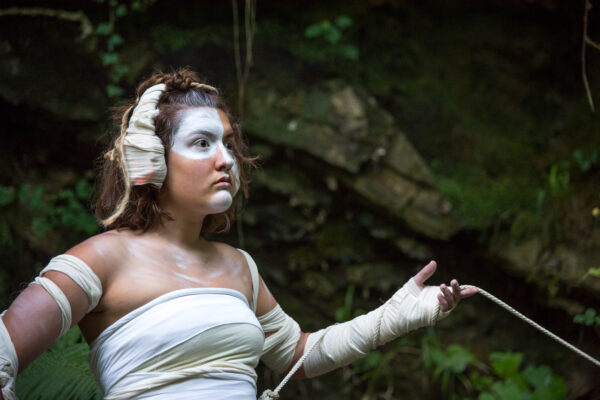 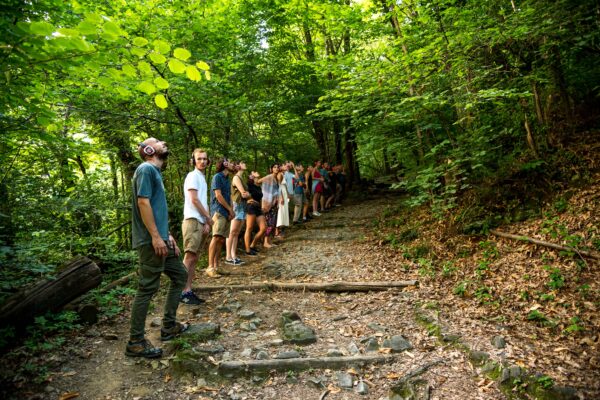 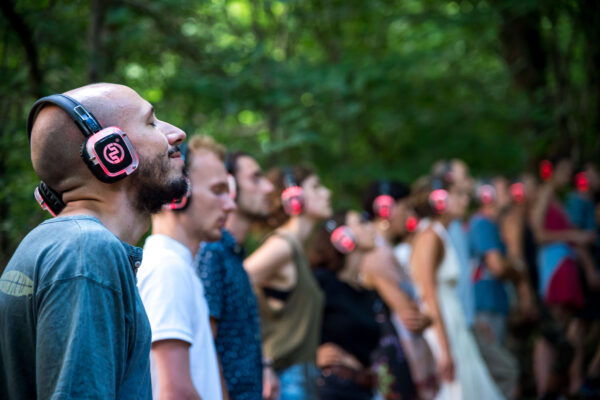 “Each scene is a discovery which requires the use of all senses, a complete immersion which is suitable for everyone. The path is easy to follow and the words are chosen with great care. These elements show how much care was put into accepting the complexities of the subject matter and reinterpreting them in a poetic work. This leads us to the discovery of nature’s intelligence and industrious efforts in resisting adversities, its adaptability, rebellious attitude and even its pleas for help.” Arianna Lomolino – Hystrio

“This project, the brainchild of Michele Losi, Sofia Bolognini and Silvia Girardi, is reminiscent of the fusions with nature found in D’Annunzio’s work, however all the narcissistic aspects have been thoroughly removed. The spectators are silent, as they admire nature’s orchestra: brooks, birds, the whisper of the wind through the trees. The sounds designed by Luca Maria Baldini and Diego Dioguardi follow this synaesthetic concert’s lead. With headphones on, and guided by a performer, we get to know the peony and the ash, oak, chestnut and cherry. […] Nature, poetry, the silent presence of the water-lilies and of female figures as slender as roots extend our vision, enlarge our perceptions and free them of any bodily connection in a rarefied dream-like dimension” Vincenzo Sardelli – Krapps Last Post

“This is not a traditional theatrical performance. The Pleadi collective, led by Michele Losi, have designed a journey, in the truest sense of the word, within nature. […] This adventure will alienate you from the modern world and carry you to the dawn of time. You will experience two hours of silence, in which the only sounds are those of the wood, both real and broadcast to the headphones provided. There are three voices in the script by Sofia Bolognini, Liliana Benini and Michele Losi. The first enters into the scientific details of the vegetable kingdom, the second is more poetic and sees the romantic aspect of each leaf, while the third, which we might call popular, tells us, in a Roman accent, about the plant’s dynamics. Throughout the walk, there will also be surprise encounters with ‘creatures of the forest’. Meeting chestnuts, cherry trees, ash and oak the time will fly. The mixture of science, poetry and tradition means that each participant will be struck by particular aspects of the information they will receive in this performance, which is going to be repeated in other natural environments.” Ivan Filannino – Milano Teatri

“There is a political message behind the main design choice of this performance: basing it around a walk. Alberi Maestri is a democratic piece of art: it strips away any intellectual pretensions and can be enjoyed by anyone who can go for a walk in the mountains, without the need for theoretical knowledge. The nature of this performance makes it a valid starting point for those who believe, not always wrongly, that performing art is hard to understand and boring to watch.” Emanuela Gussoni – Stratagemmi Prospettive Teatrali

“The description of the various trees, as well as thoughts on on the carelessness with which humans treat nature, poetry, references to the gospels and more are sent directly to headphones, which the spectators are occasionally invited to remove and to concentrate on the sound of leaves and insects, water and wind.
The composite script is engaging and greatly enhances the charm of the forest and of its denizens – both animal and vegetable – which now appear to us. Having climbed to the top of the hill, these creatures now less foreign, and even, in a way, pulsating in unison with our soul.” Laura Bevione – PAC PaneAquaCulture

“On the walk you will encounter splendid creatures while listening to a story on the headphones. Alberi Maestri in an unmissable experience.” TI TO – TAGteatro